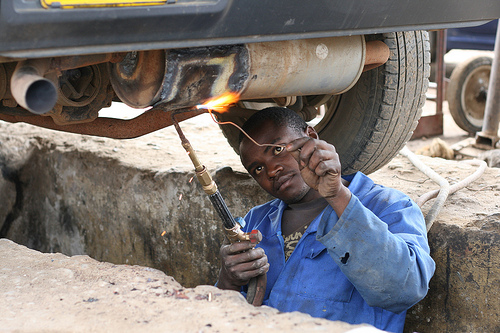 Eno found it difficult to think in her high state, She sat in the car confused, tried to start the car again, no luck. Eno got out of the car terrified, it was 11:45PM, she paced back and forth as cars sped off past her. She pulled a lever inside the car to open up the bonnet and see if she can fiddle with something under the hood that can help her start the car.

As she stood on the bridge in her tight short black leather dress, she noticed how it seemed like the bridge was moving beneath her, sort of a slow bounce, this isn’t the alcohol, she told herself.

People had always told her they had that kind of experience on third mainland bridge but she never experienced it before, she went back into the car and locked herself in. If only she wasn’t so wasted, she would know what to do right now. What to do! What to do!! She spoke to herself softly.

Call Marouf!! A bright bulb light up in her head.

Seems like the only thing to do right now, he is her trusted mechanic, some athletic middle-aged short Ijebu boy. It’s too late to call but there isn’t any other option, she said to herself. She picked up her phone and dialled Marouf, he picked up at the fourth ring after the third try to call his phone, horrible network on the bridge.

‘Aunty Eno’, Marouf said. The background music was almost deafening, seemed like Marouf was at a party.

‘Marouf, the car don spoil for third mainland bridge o’ She said without any atom of ‘poshness’ in her which she really did

‘Ohooooo Aunty! I dey party for Obalende, I dey enjoy myself’ He said

‘Come jo! You know say I be woman, before all these area boys go come’ Eno tried to threaten him

‘Come jo! I dey that side after that Yaba turn! Do quick jo’ Eno said

‘If dem rob or rape me, na you I go use Police catch o’ Eno continued.

She cut the phone, anticipating the arrival of Marouf that seemed to take forever. She looked around, making sure that all her doors are locked tight and none of the windows are down.

Her mind drifted back to the dance with Bode, her friend’s colleague, that boy can grind someone into orgasm was her thought when she saw the light of a danfo bus parking behind her from the inner mirror, Some guy in a tight-fitting outfit came out and the bus disappeared.

The guy came close to her window and knocked, she looked up scared only to find out that it was Marouf standing there. She seemed very happy to see him, she came out and almost hugged him.

‘You be yeye” Eno said to Marouf  jokingly ‘You come tey like that, for say armed robbers don come rob me nko’ She continued.

‘Aunty nothing go happen jo, Police dey for there na’ Marouf replied pointing down the bridge.

Marouf seem fitter today, although artisan are almost as ripped as sports people, she thought, it must be his body hug shirt.

‘Aunty, open the bonnet’ Marouf said moving towards the front of the car.

‘I don open am since’ Eno replied

Marouf opened the bonnet and fiddled around the battery head, asked her to try to start it again, she did and the engine roared back to live.

She screamed out of excitement and ran towards Marouf, giving him a full body hug and in return Marouf grabbed a decent chunk of her ass, she ignored like she dint know what he did.

‘Wetin happen na, wetin do the car, wetin you touch?’ Eno had 1001 questions for Marouf except for the ass grab which she felt ticklish and kind of liked.

‘Na the battery head dey shake, e be like when you dey enter gallop na him e comot’ Marouf tried to explain.

She moved beside him to see where he was pointing, as she looked downward, the full light of the car shone bright against Marouf’s inner thighs, and it kinda seemed like he had a big cucumber in his pocket.

She screamed Jesus at the sight but Marouf thought she was talking about the battery head not been tight enough. He promised to help her to do it well next day,

‘I go drop for road, make I go meet my wife for Mowe’ Marouf replied

‘Aunty! No! I need to see Iya Bose this night o, wetin dey my body no good o’ Marouf joked

Marouf zoomed off, as they sped the rest of the way to Magodo, Eno’s house.

She came out of the bathroom, put on a jalabia with absolutely nothing underneath, her nipples rubbing softly against the material of the gown, her pussy feeling slightly wet, she couldn’t shake off the horniness.

As she entered the living room to give Marouf a pillow and soft material to cover himself with, she found him boxer alone, snoring away on her couch, with the boxer not able to adequately house his dick, the tip of the dick peeping out of the short, looking closely the dick seem to be semi-erect.

Marouf was still asleep, snoring like no man’s business, his dick seem to get bigger and bigger, he was probably having a wet dream. She mustered enough courage, knelt infront of him, caressed the dick softly brushing her hand against the tip of the dick, like someone pampering a dog, marvelling at the share size of his manhood.

She held it around the centre, tried to make it stand straight, the boxer kept interrupting the movement, she laid it back and dragged the top of the short down to free the dick. She had a feeling Marouf was awake now but he was enjoying it way too much, so she continued.

The pussy rub got her thoroughly wet, she squatted infront of his thigh, holding the dick at its base, as she lowered her pussy into the dick, looked like the penetration took forever, as the dick found its way into the inner trenches of her pussy, she continued to take deep breathes until she felt the dick hit that spot, then she let go.

The thrust started slowly, as pussy was trying to get used to this monstrosity in Marouf’s inner thighs. Marouf stretched his leg further, as she continued to pick up pace, slowly moans began to escape from Eno’s mouth. Marouf opened his eyes, to see Enoh riding his dick not so conveniently while her eyes were almost shut, he adjusted a bit as he bent forward a bit have a feel for those boobs that always stared back at him in her famous open chested tops.

He adjusted and she stood up, and slept on the soft rug, held out his hands, she straddled him in the middle, with more space to play with, as she settled in comfortably on the dick, he pushed up the garment, Eno took it off completely. Finally staring at him is the evenly toned big boobs with cute nipples. He covered his hand with her boobs as she shifted back and forth on the dick, the feeling for her was to die for at the present minute.

The brushing of her knees against the rug will definitely cause a burn on her knee but that’s a discussion for another day, Marouf’s dick was making more sense this instant. Feeling like he wasn’t getting any of the action, held her waist up with his big strong hands, hitting it from underneath her.

She was very impressed with the athleticism he was displaying, his waist continued pumping up into her pussy, the big dick is awesome once you get used to it, she told herself.

She began wailing, laughing and screaming, all three in no particular order, tears streaming down her face. The dick was fucking on point,

‘Baby! Don’t stop’
She can’t remember when the mechanic Marouf became baby but it was definitely the good dick in effect.

‘Fuck that pussy like you own it’
Eno was on another level, the dick was making her speak in different kinds of tongue, Marouf was a lot stronger, he kept pummelling her with strength, zeal and vigour, consistent hard strokes, pinning her down by the hips.

He collapsed onto the rug, completely drenched with her body fluid all over his dick, she clinged unto him, plugged his dick into her pussy, sleeping off in the process. Tomorrow, she will worry about why she fucked her mechanic, when the mechanic became baby and most importantly, if she will be having a child for her mechanic.

All she wants right now is the dick inside her pussy.

I want ma dick in a pussy all the time

Note: like all the other 'Dubai Tales' – published, or...

The Mechanic I cannot believe this, what do I do?...

It's All in the Bush by Cristiano Caffieri

John Madely was in charge of a rather special garden...

The Boss and I

Breaking in My New Sex Toy by yourbabygirl7©

This begins a new series of sexual escapades with my...